The caves of Can Riera

The caves of Can Riera are an almost magical place, where time, wind and rain have written their stories on the cave walls.

In this post, I’ll explain in detail how to get to this beautiful and accessible little corner very close to Barcelona to anyone who wishes to get away from the city with little time on their hands. Usually, I don’t go into such detail in my posts about the places we visit and concentrate on the photographic aspect of our trips, but this place deserves to be known, in a respectful way.
Unfortunately, even in this remote and virgin place, we found traces of human leftovers, like plastic waste and names doodled in the cave walls. So I plea to all of you to take care of this little jewel and to leave only your footprints in the sand.

The caves of Can Riera are located near Torrelles de Llobregat, a 25 minute drive from Barcelona. The caves are not very deep but rather sandstone walls, but their curious red and orange color makes them rather alluring and photogenic.

Generally, it´s an easy and idyllic route with a gentle ascent, passing through a forest and a cherry field, only shortly before arriving at the caves does the trail get a bit complicated and there’s a short part where you need to use your hands to climb a rocky slope (there are roots to hold on on to, be careful though not to confuse them with a cactus, as in my personal and painful case). This short stretch of about 2 meters makes the route unfit for very young children or people not used to physical exercise or hiking. We advise you wear clothes suitable for trekking, as they will get dirty with the red dust from the sandstone of the caves that flies through the air and covers the whole terrain. Our dogs who accompanied us still had their white feet painted red from the dust a week afterwards.

There are several routes to get to the caves. In this occasion, we opted for an easy and fast route, after having hiked 20 km through knee-deep snow the day before. So here it goes.

From Barcelona we took the BV2005 to drive to Torrelles de Llobregat, entered the town at the roundabout and left the car in the parking lot of the sports center (GPS coordinates: Camp Municipal Can Roig, 41.3635359, 1.9835304).

If you have GPS we recommend you feed in these coordinates: 41.364793, 1.965469, which will help you reach the cherry field of Coll de la Serra de Can Valent. Don’t worry, we also give you detailed and visual indications of how to get there below, in case you don’t have GPS or don’t have coverage.

We start the route by returning the same way on which we entered the parking lot and then take a turn to the right onto the dirt road, you’ll spot a mansion behind a fence on your right.

After following the dirt road we reach the first fork in the road where we turn left. A bit further, we will get to another turnoff with a sign “Cami de Can Roig” and we’ll continue our path to the left of the sign. After a while, we arrive at a new fork where we continue to the left. Continuing straight for some time until after the curve, we get to an intersection where we carry on straight, taking the road with the restricted access sign.

We continue straight until we arrive at another crossroads and turn left at the signpost. After passing through the cherry field of Coll de la Serra de Can Valent, we take a right turn at the water tank (we have reached the coordinates initially set in the GPS 41.364793, 1.965469).

Following the path we eventually get to Collet de Can Riera, where we see a large rock with a blue dot (we´ll find more of these dots on our way, indicating the trail to the caves). We enter the forest to the left of the rock, passing trough two trees, each marked with a blue dot.

We follow this little path and keeping to the left pass through some brush and a dried watercourse, where the trail is barely recognizable sometimes.

We know we’re on the right track when we pass another tree with a blue dot and a bit later, the first solitary cactus.

After the first obligatory photo session in the small cave, we retrace our steps and after a few meters, at the group of cacti, hike up the path which is now to our left, which eventually will lead us to the main caves.

At the final stage of our ascend we have the choice to go either right and climb a vertical steel ladder, or as in our case, clamber with hands and feet the rocky slope on the left of the cactus.

After this final obstacle the main cave(s) open up to our right, they are interconnected by holes in the sandstone walls.

The upper cave is the biggest and the most beautiful and can be seen through the ceiling of the lower cave. To reach it we pass the lower cave and first climb down a small slope and then follow the short trail, keeping to the left.

We turned around here and headed back to the parking, following the same route we came from.

Below I leave you some photos of every nook and cranny of the caves. If you need my help to get to this or to other places and have a professional photographer report your journey, feel free to contact me, I´d be happy to join you as your guide and/or personal photographer.

For a German version of this report follow this link to Die Höhlen von Can Riera. 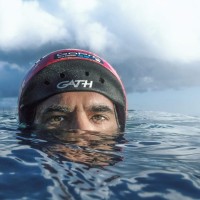